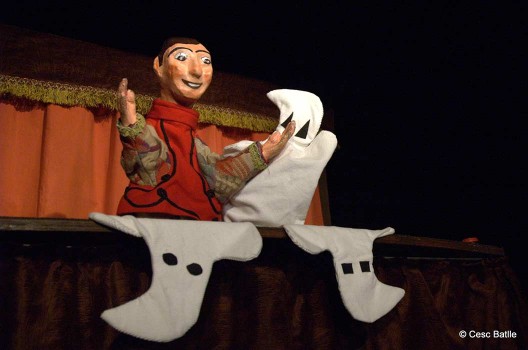 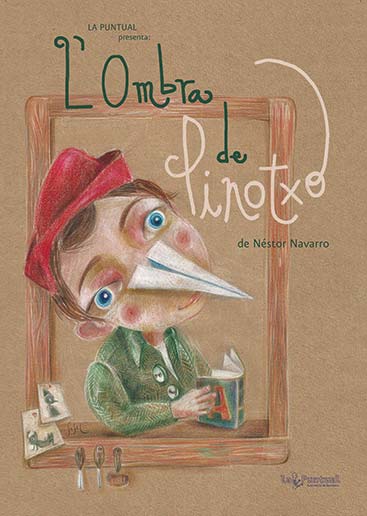 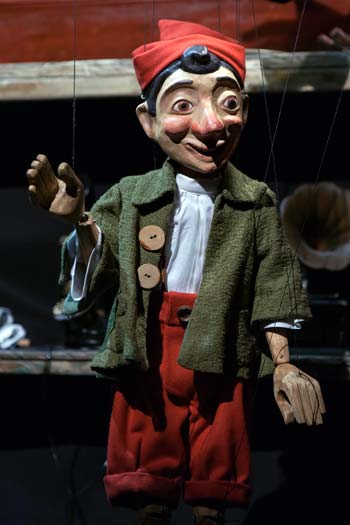 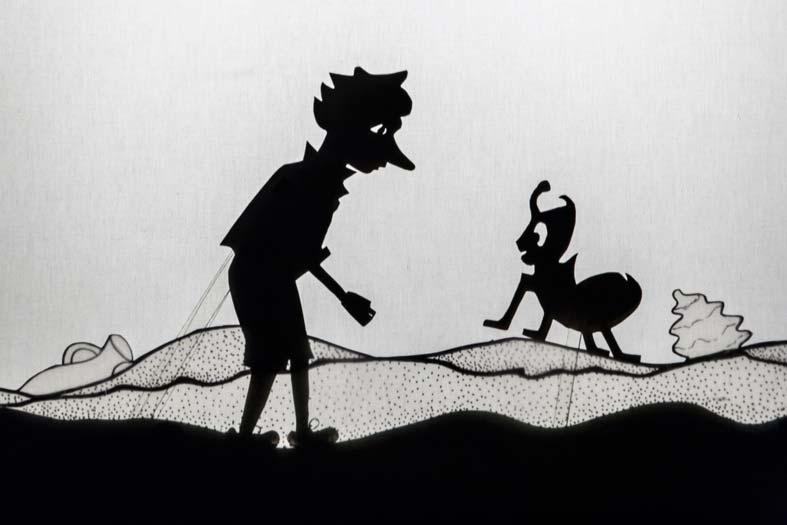 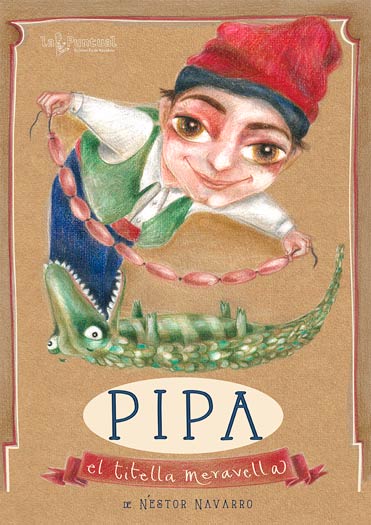 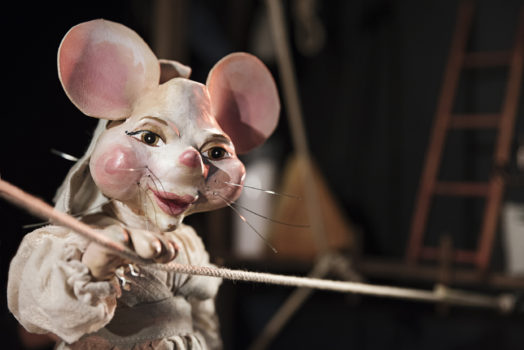 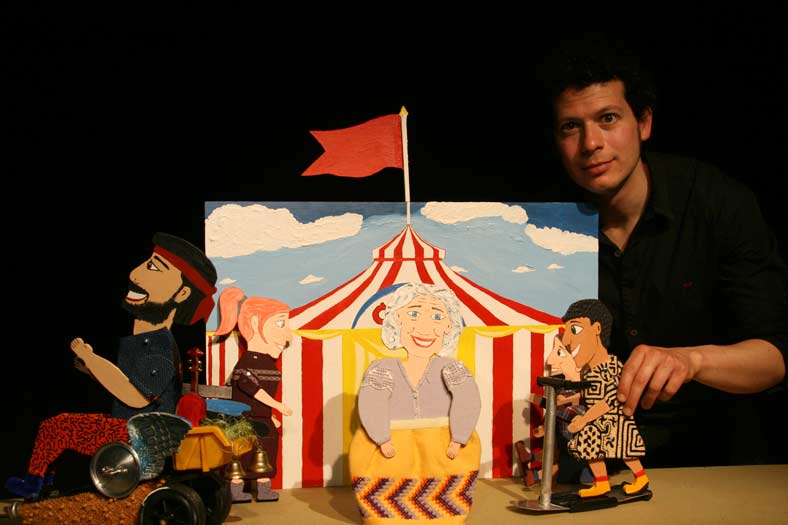 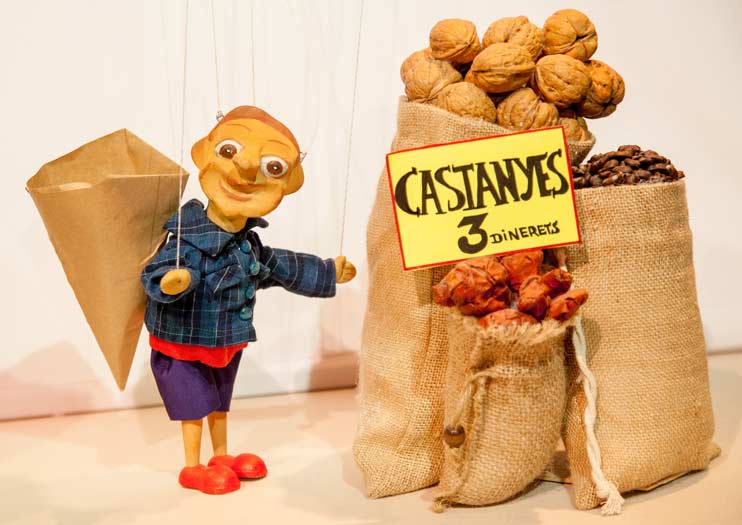 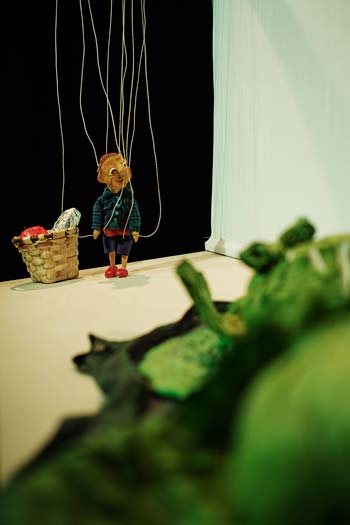 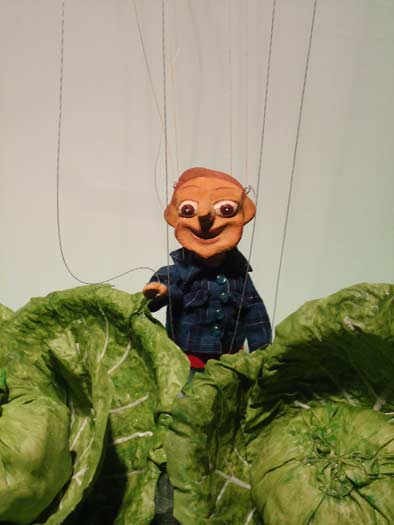 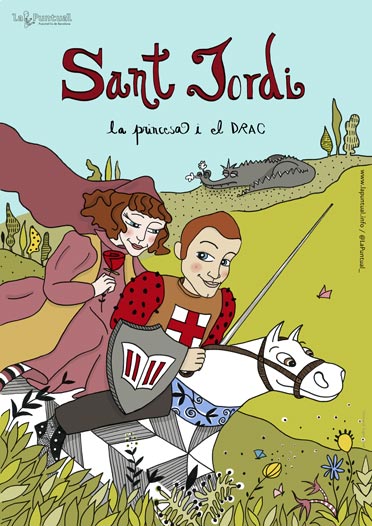 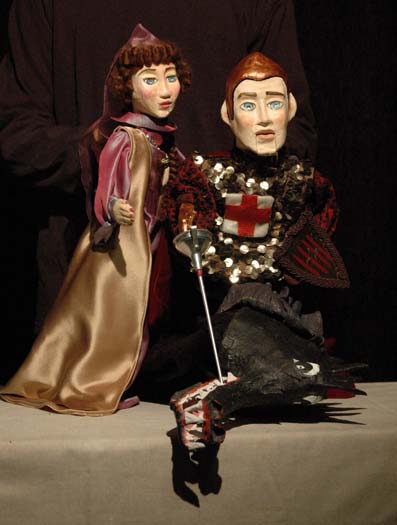 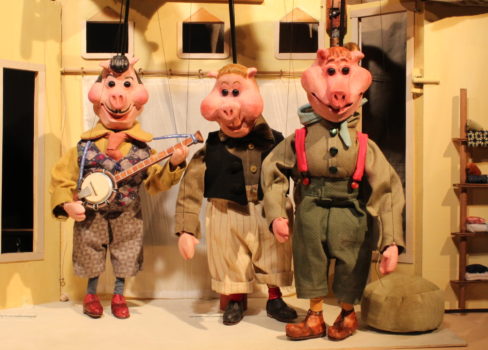 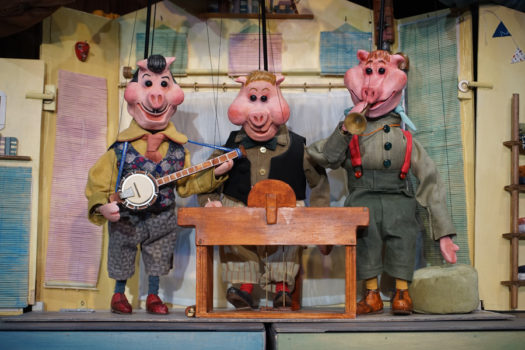 La Puntual is also a travelling puppet company, a regular visitor to festivals, theatres and events, indoor and outdoor, locally and internationally. Some memorable performances have been given in venues such as the Royal National Theatre of London, several World festivals at Charleville-Mezieres in France, the Ishara Festival of New Delhi, La Planeta at Girona, Tolosa´s Titirijai festival, Italy´s Arrivano dal Mare, Sevilla and a very long etcetera going back to almost 40 years.
The following are the productions which the company has produced for touring to any part of the world. 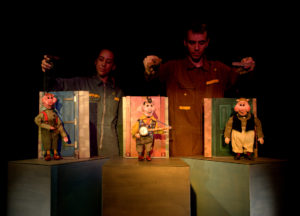 This is the story of three piglets and a wolf, who, because of their musical skills, shared many adventures. As you well know, Boink made a house of straw, Toink made one of wood and Poink of bricks, but what they all ignore is that a great storm is on its way which will change for ever the end of this classic tale. A fun comedy puppet show for all the family. Trailer
more information 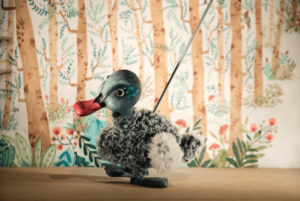 “I'm not ugly, I have a distinctive beauty." These are the words of the Duckling when he leaves home on the adventure of his life. A challenging but happy journey, portrayed in a moving panorama with changes of seasons, encountering other animals and astonishing landscape. We invite you to accompany our "ugly" Duckling on this musical journey that will take you to a predictable, though not without surprises, end! Trailer
more information 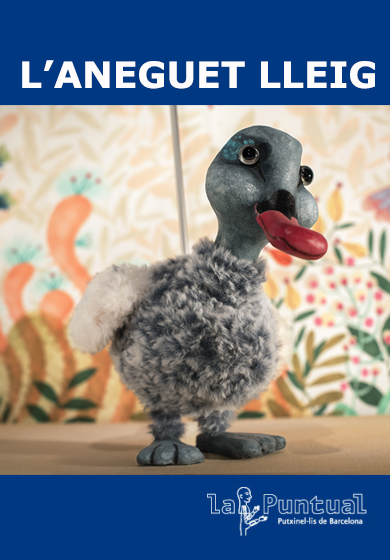 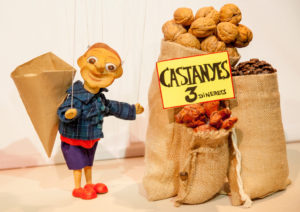 Patufet is a very, very small boy. So small that he sleeps in a tin of sardines and hides under a cabbage leaf. So small that his parents are afraid that if he goes out into the street, people will not see him and ... chaf! But he is also very clever, brave and stubborn! This morning, when he got up, Patufet was absolutely sure; today will be a day full of adventures!
more information 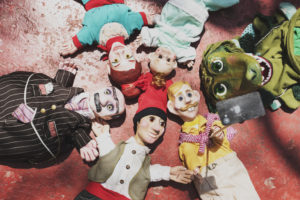 PIPA does not want a quiet and peaceful life, he wants to play, to have fun, to fall in love, to live life ... But he will find a world full of surprising characters: Mister Tòfol and his selfie stick, Nina and her ice cream, the Banker and his machine, and even a very hungry crocodile and its bubbles. It is a crazy, often surreal and tender comedy for puppets. PIPA PUPPET SHOW is a comedy for all ages inspired by the traditional glove puppet shows that have been performed since antiquity in streets, squares and parks of European towns and cities. Although it is a traditional show in its form and dramatic structure, it is contemporary in its dynamic and rhythmic execution as well as the modern-day characters that appear. The show captivates the audience with an energetic manipulation rarely seen, a succession of situations, confrontations and gags that refer us to the classic and universal themes of good and bad, love, fight against abuse, friendship… all eagerly braced by spectators of all ages, who participate in the action and influence in the rhythm of the show. Trailer
more information 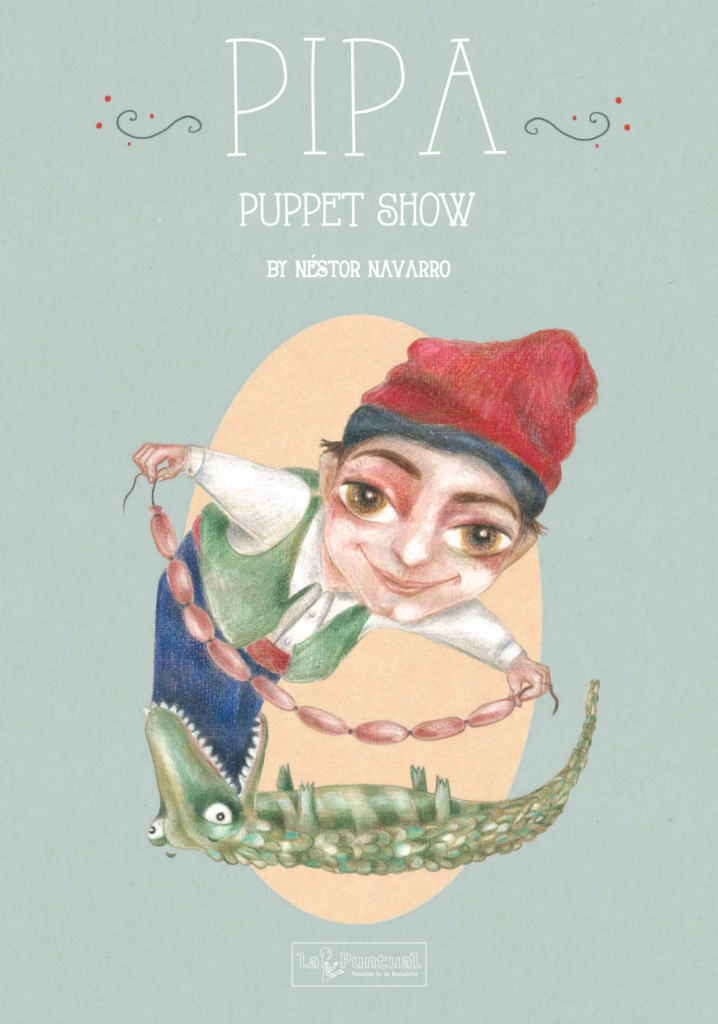 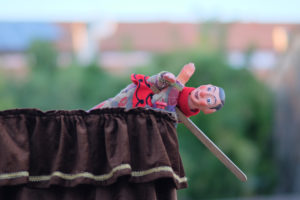 Routines is a glove puppet show with some of the principal personalities of the traditional repertoire that was for centuries performed all over Europe. A show that can be performed almost anywhere, indoors or out, for young and not so young. A succession of comic sketches or “routines” with hardly any words and skilful manipulation. The main character of this performance is Malic, the adventurer, who on this occasion faces the revolt of anything that comes on stage, be it objects or individuals. Slapstick comedy at its best. Trailer
more information 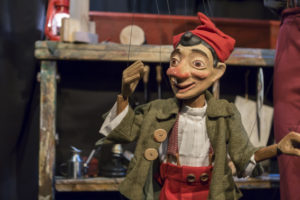 At the end of the classic tale Pinocchio becomes a real boy, and like all children he grows up, now he is 30 years old puppeteers. From his marionette workshop he tells his story through shadow puppets and marionettes. A funny and poetic version of Carlo Collodi’s classic. Co-production: Barcelona Grec Festival 2014 and La Puntual.
more information 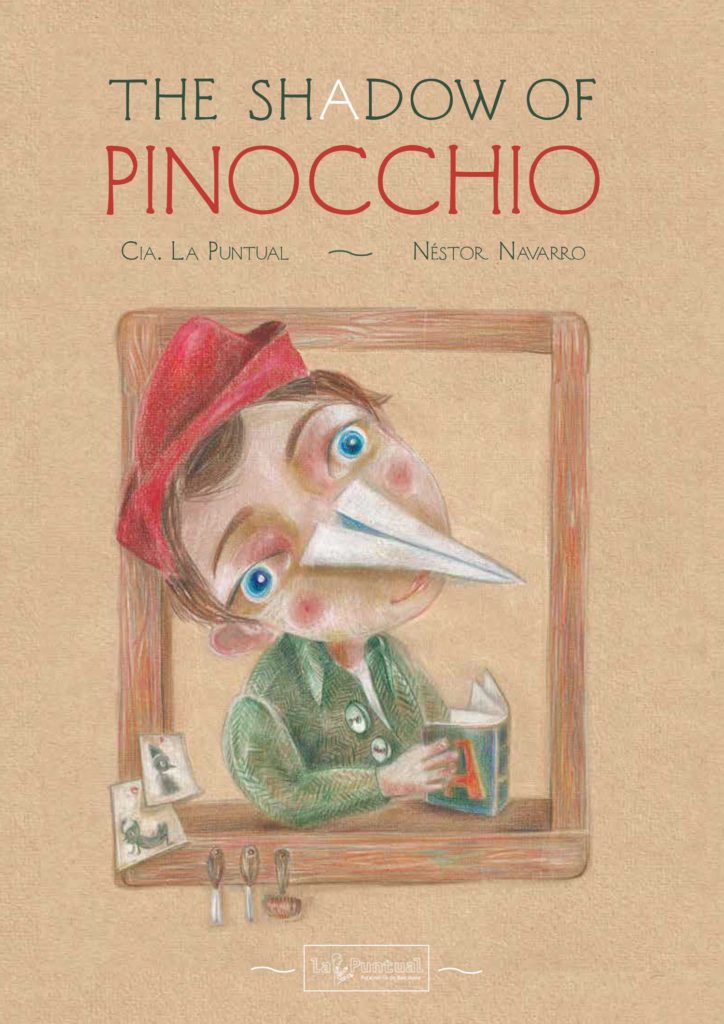 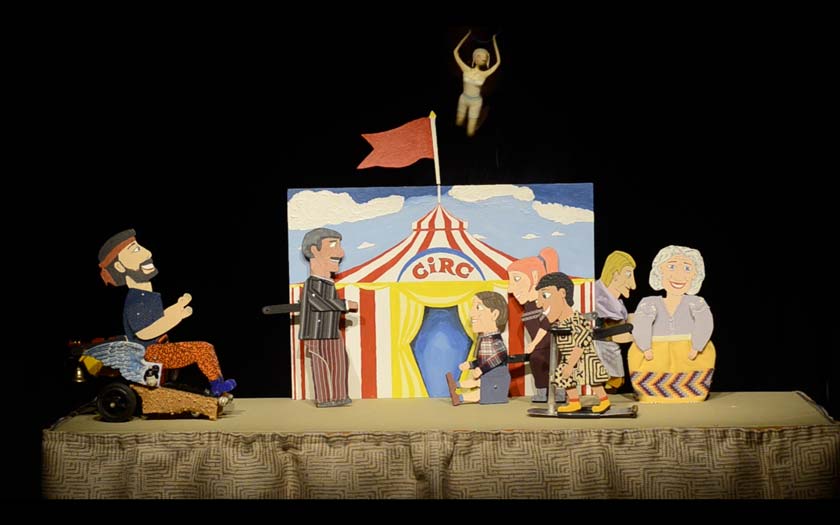 There is a rumour in Babel, " Laughing is bad for your health!". The people not only believe this to be true, they also think that it is contagious! Bilal and Marina will do everything they can to bring laughter back to Babe. Trailer
more information 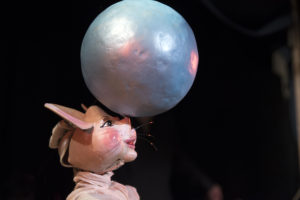 Greta the Mouse... that swept the staircase.

Greta is a mouse, and a great artist; she juggles, swings from the trapeze, walks the tightrope and... sweeps the theatre. While cleaning under the stage one night after the show, she finds a coin! Her friend, Rinaldo, a member of the backstage crew, advises her to buy a pretty bow to put on her tail, but Greta is determined: she will use it to produce a great show! Today is the day of the auditions to determine which animal will be her partner on stage. Will it be the ventriloquist Cock? Or the Pig visual arts performer? Or perhaps the Dog flea circus owner? Or perhaps the Donkey Magician? Or will she fall into the claws of the hypnotist Cat?
more information 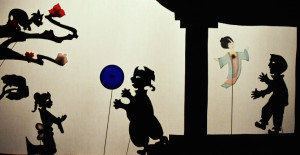 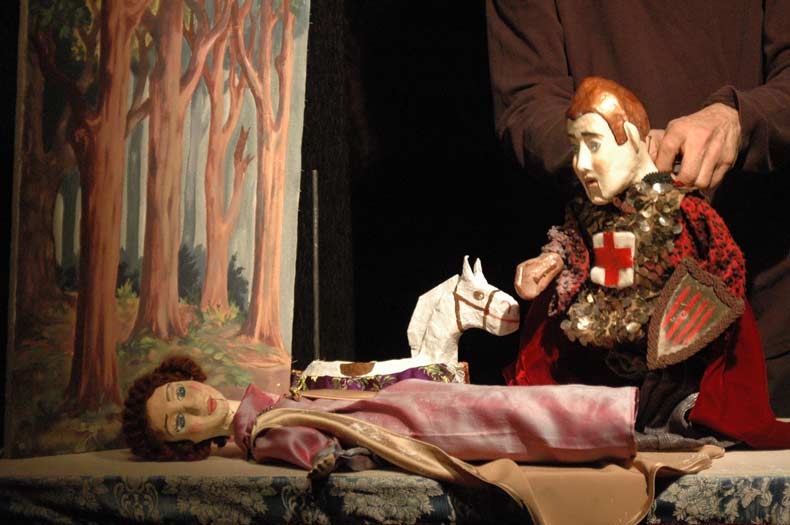 Saint George, the Princess and the Dragon 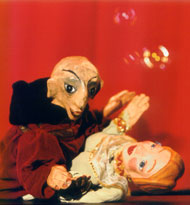